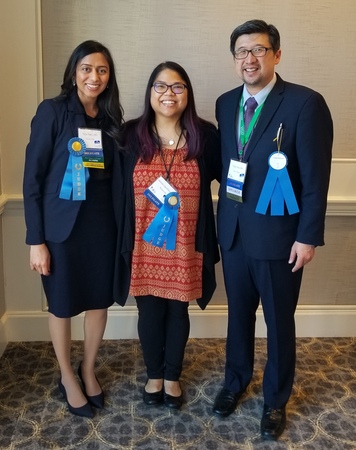 (May 2019) The Columbus Osteopathic Association (COA) awarded a $500 prize at the 9th Annual Osteopathic Poster Competition & Exhibition, held Saturday, April 27, in conjunction with the Ohio Osteopathic Symposium. It was the first time COA participated as a prize sponsor.

The COA Executive Council, under President Tejal R. Patel, DO, initiated the new award to specifically recognize osteopathically-focused research. The criteria calls for research that studies the efficacy and outcomes of osteopathic manipulative medicine, the impact of osteopathic principles in practice, and/or osteopathic medical education.

All students, interns, and residents were eligible for the award.

In addition to Patel (left), judges were Ying H. Chen, DO (right), and Miriam L. Garcellano, DO (center), who presented the award to Rowane that day during the Symposium session Emerging Osteopathic Research.

COA is a professional society of osteopathic physicians that has represented central Ohio DOs for more than 60 years. COA encompasses 19 counties and is the largest local affiliate of the Ohio Osteopathic Association.